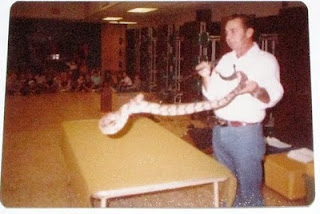 My elementary school -- of which my dad was the principal -- had one regular assembly that was not to be forgotten: The Snake Man. Kids don't have such learning experiences today. Here's a poem and photos from Westside School in Cedartown, Georgia.


We were seven years old that day

when the snake man visited

the Snake River Canyon and the

We were from the country,

not the town school,

and were not afraid of snakes.

We gathered on the lunchroom floor

around the wooden boxes

with vents to let the snakes get air,

a komodo dragon too.

The snake man came from Gadsden, 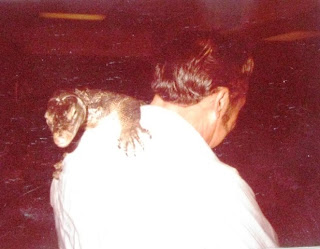 tucked in his short-sleeve

a camper built just for snakes.

He showed us vipers, dangling from

the hook of his four-foot metal pole—

with the non-venomous kind,

we caught at home and kept in jars.

his komodo dragon going wild, but me,

scurrying lose in a determined slither,

arching up, fanning out his head and

spitting onto the wall of Westside School,

that day we were seven years old.