All True: Praise for Barry Hannah in New Oxford-American 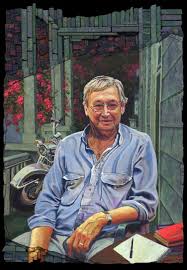 Fantastic recollections about the irreplaceable Barry Hannah in the new Oxford-American, and I have one of my own: About a decade ago I applied to the MFA program at Ole Miss and didn't make the cut. About five years later when my first novel was published, I wrote to Barry and sent him a copy. He responded with a hilarious and generous apology letter for my "disacceptance" and kindly praised and encouraged my work. (He was the kind of man who wrote me back even though he didn't really know me.) I was lucky to study under him later at Sewanee Writers Conference, and that my essay about Larry Brown was paired with his in the 2006 issue of the Yalobusha Review. The man was as every bit good and true a writer and teacher as the many voices in this this article testify.
Posted by Joe Samuel Starnes at 12:12 PM