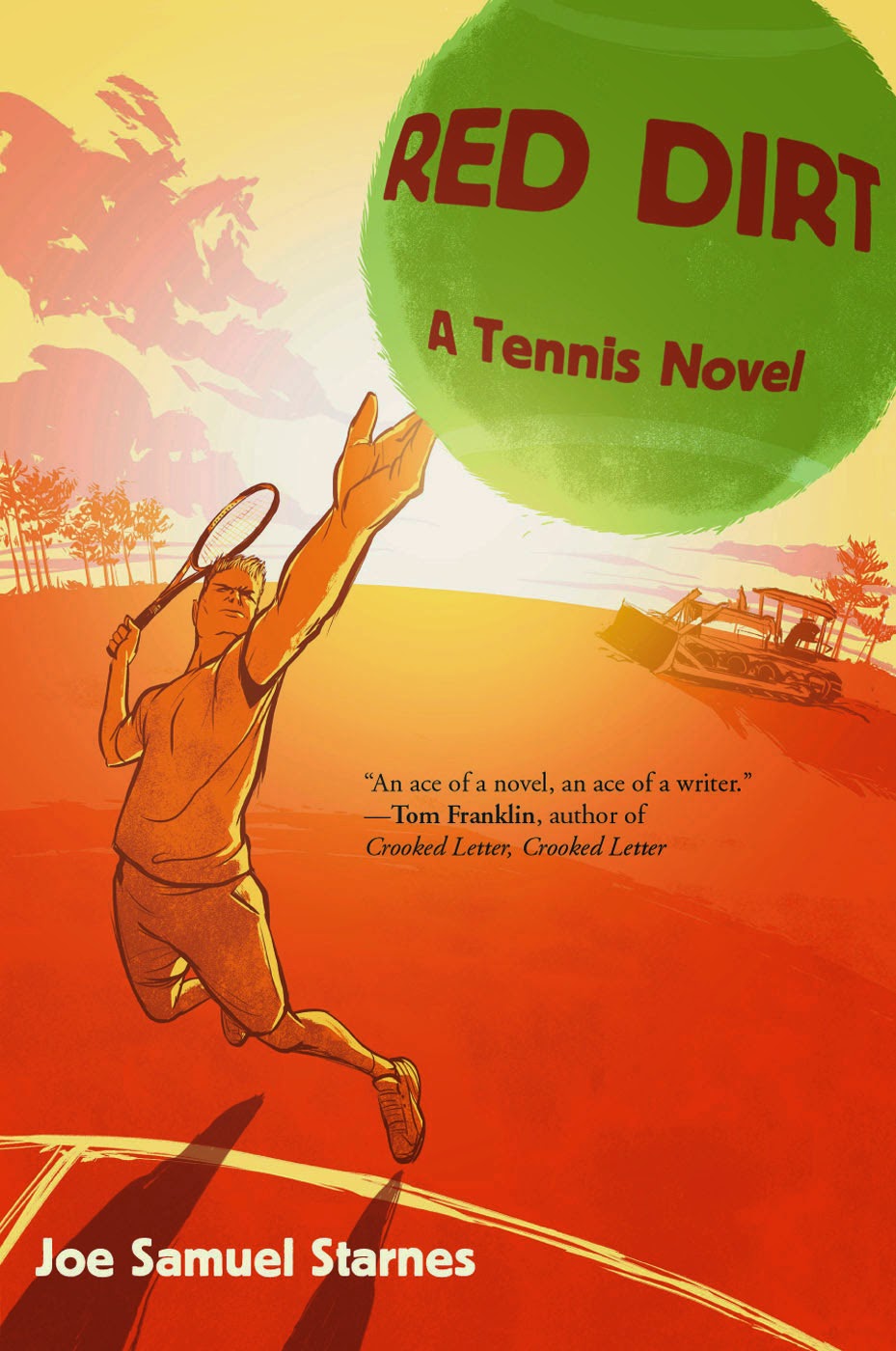 My third novel, Red Dirt: A Tennis Novel, published by Breakaway Books, will be available in late March.

Praise for the Novel

“Starnes spins a tale with the pace and power of a Rafael Nadal forehand.” —Jay Jennings, editor of Tennis and the Meaning of Life: A Literary Anthology of the Game

“Alright, literate tennis fans, it’s time to put down the remote and set aside those stat sheets and take an alternately amusing and inspiring trip from the top of the pro tennis barrel to the bottom—and back again. Joe Samuel Starnes’s book radiates an aficionado’s understanding of not just how the game is played (on and off the court) but what it takes to triumph in the hypercompetitive pro game.”  —Peter Bodo, Tennis magazine senior writer, ESPN columnist, and co-author of Pete Sampras’s autobiography, A Champion’s Mind

“Red Dirt is solid pleasure. Starnes knows what it is to compete, to hope to be made whole by competition, to overcome not just your opponent but your own unquiet. This is a tennis novel, but any athlete—no, any reader—will learn a lot and enjoy the learning.”  —John Casey, author of Spartina, winner of the National Book Award

Red Dirt is the story of Jaxie Skinner, an unlikely professional tennis player
from a blue-collar family in the sticks of rural Georgia who takes up the game
at the age of three when his father scrapes a court out of the red clay behind
their farmhouse. He is a natural, rising to the top of junior tennis, and at
eighteen has great success at the French Open. He falls as quickly as he rose,
however, when troubles back home and injuries arise. He quits the game for
years, but then mounts a comeback, struggling for almost a decade in the
unglamorous, low-paying minor leagues of tennis, often living out of his van,
before getting one last big shot. A fascinating study of tennis, its demands
and tactics, as well as a look at the insular and often selfish character required
to reach the pinnacle of the sport, Red Dirt is the Rocky of tennis novels.

Hi Joe, I just finished reading your book! Great stuff! As an English teacher, newspaper advisor and part time uspta tennis coach, it was perfect for me. I also have been working with my son since he was a baby on our backyard court, just like in the book. My son is 14 and has been as high as 3 in the nation, Cannon Kingsley. It's an amazing process, and your book gave me some interesting insight into a possible future. It's really tough trying to figure out how to do the right thing with him for his tennis and school. Usta really seems to do its best to make good grades and tennis success incompatible. He's on full scholarship at the McEnroe Academy and still in high school, unlike his peers across the nation and world. Anyway, thanks again for writing it, I know there isn't a huge audience for tennis fiction, but we're out here! I hope you write another one. Feel free to use my son as the protagonist, lol.
Harry Kingsley