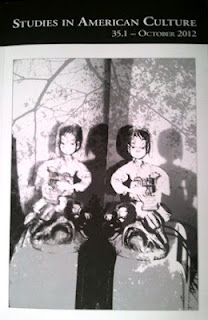 Jean W. Cash, author of Flannery O’Connor: A Life and Larry Brown: A Writer’s Life, reviewed my novel Fall Line in the October 2012 edition of the journal Studies in American Culture. She is the first reviewer to make the connection between it and my first novel, writing:

Fall Line, Starnes’s second novel, is quite different from Calling, in which two men from the South—both much damaged by heredity and experience—meet on a long bus trip between Las Vegas and Salt Lake City.  The journey motif provides an apt setting for this novel of personal disclosure, tragedy, and tentative redemption for at least one of the men.

Although different, she notes the use of the character surname Blizzard in both books.  Cash writes:

The central character in [Fall Line] is Elmer Blizzard, certainly a relative of Ezekiel Blizzard from Calling; both resemble Hazel Motes: Zeke Blizzard has spent more than twenty years as a country evangelist out to save souls; Elmer Blizzard would like to save the Georgia countryside that Lake Terrell will swallow.  Both characters possess the intensity and lack of focus that seem to insure their demise.

Blizzard is a name often encountered in Middle Georgia. I used it because I liked the sound of it, but I also think it's funny that it's a popular name in a place where it almost never snows.

Finally, she concludes the review with these kind words about Fall Line:

Starnes has produced a novel worthy of attention, providing real insight into how the power of money and government contributed to the loss of the agrarian South. Confiscation of private land for money and tourism was certainly rampant through the South during the first half of the twentieth century…In addition to the topical issue, the novel carries universality through Starnes’s characterization of Elmer Blizzard, a man like many humans, never able to accommodate to life.  Starnes knows his home area and its people and how to write about them with admirable authority and poetic understanding.